At age 82, Carolyn Helfenstein of Cobourg, ON is looking for a publisher or publishing company searching for a Newfoundland saga, perhaps a three-generational page turner, intertwined with often-forgotten Newfoundland facts of the 1800s, ‘the stuff that can make a historical fiction zing’.

Well, Carolyn says she has that book. It is called Rock Solid – and for good reason. It could become a second edition copy of Rock Solid published in 2018, or it could step out and join the lucky ones that become a TV series. This book has 40 individual moments, narrated mostly by Carolyn’s imaginary Newfoundland characters. Hopefully readers will understand the humour, some will shed tears, Carol shed tears as she let one of her important stars die, and Marion and Ted are crazy in love as they board a three-masted schooner heading for Bristol, England.

Although already published by Friesen Press, Carolyn felt it was time to have Rock Solid prepared for a second edition. Chris Cameron has taken on the task, editing Rock Solid this summer, and we are sure now the copy is clean.“ And when I was particularly. Happy with one chapter, I smugly comment, ”Good stuff eh?” Chris typed back, “It could become a TV series.” 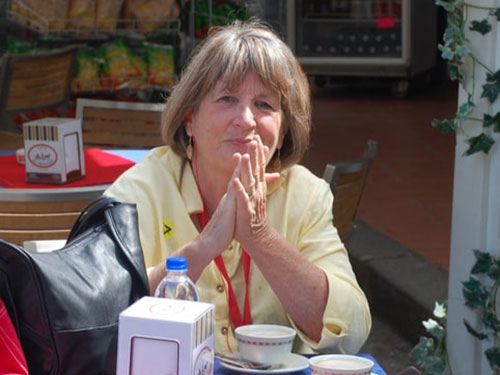 Why writing at age 82? I had a busy life. At age seventeen I was forced to look for a job due to family circumstances and at the same time, the province of Ontario, being very short of teachers, was forced to hire grade twelve grads. One long train ride, one taxi ride, and one bus ride later, I was picked up by a man in an ancient car—to arrive for the interview, in time.. A committee of four was waiting in the small but cosy farmhouse. I was tired, yet alert for any question. Even this one: “And are you prepared to bring your own strap?” Without a blink of an eye, I responded, thinking how tough my Newfoundland forefathers were: I said, “No sir. I think that is the responsibility of your school board!”

With that I was hired. I was to be a teacher, a principal, and the city girl in the one-room schoolhouse called Strange, with no drinking water, But yes, a piano. No car, no bike, but I had 30 great kids to teach, 6 grades in year one, five grades the second, wages $2400.00 per year. Back at Strange School about 55 years later, I heard, “She’s here, she’s here.” and out of the small crowd came a robust 60-year-old man, “You were my best teacher, I never forgot you. I was in Grade One here at ‘Strange,’” he said. And yes I remembered him. 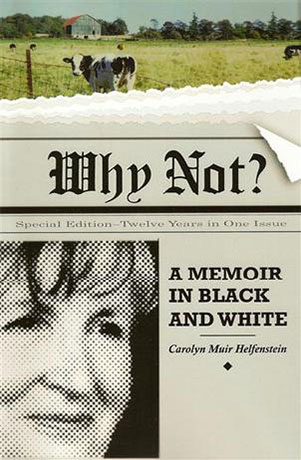 Why Not?
A memoir in black and white, Re 12 years of owning and running a small town newspaper. Published by Brucedale Press, 2008. 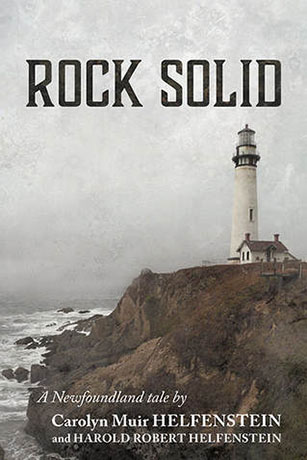 A creative non-fiction combining the vivid history of the British colony of Newfoundland in the 1800s and a fictional tale of love, adventure, struggle and humour, narrated by 8 of Helfenstein’s main Newfoundland characters. Edited by Harold Helfenstein. It is the result of wanting to understand what it is that happened to create the Newfoundlander’s unique identity. Published by FriesenPress, June 2018.

Then came Teachers College and a year later, real teaching (and now I’m Mrs. Helfenstein) A highlight was when I was appointed by the local school board near Buttonville to establish a class for their forgotten youngsters, the most rewarding year and a half of my teaching career and a story in itself.

After teaching, the Helfensteins bought a dairy farm, and probably the biggest surprise in their second year on the farm, was the birth of their baby daughter, and without any knowledge of the surprise ahead, one hour later a baby boy appeared on the scene. The phone rang in the delivery room, “Is that Mr. Helfenstein? Good. Give me the phone, nurse.” Six years later a second son arrived, solo.

After 25 years they sold the farm and she and Harry bought a community newspaper in Teeswater. Two years later Carolyn was voted unto the Board of OCNA (Ontario Community Newspaper Association) and eventually was president. Then came the emotional decision for both of them after 12 years, they closed the 100-year-old paper. No one was buying newspapers anymore.

Deep in the doldrums from having lost the need to write, Carol began to write again. Now 20 years later two books have been published. Why Not? a memoir of running a weekly newspaper and Rock Solid, A Newfoundland Tale. Will Rock Solid remain a book, perhaps a second edition, or will Carolyn move on to writing a sequel?

CCNA AWARDS TO THE TEESWATER NEWS

Helfenstein paints the sweeping landscape of historical Newfoundland with her saga of Newfoundland families in 1800s.

Carolyn (Muir) Helfenstein’s family left Newfoundland when she was a child of seven in 1944 and that huge move, and her father passing away suddenly two years later as they settled in Sarnia resulted in her losing the sense of identity that she would have developed growing up surrounded by Newfoundland relatives.

However, following the very early step into teaching first in a one-room school at age seventeen, she attended Teachers’ College, the challenge of guiding special needs students, a life-long marriage of now nearing 60 years, three children, and a bevvy of grandchildren. She and her husband ran a dairy farm for 25 years, ran a community newspaper for 12 years, and then in retirement ran a B and B for another 12 years and it was then she began writing, first a memoir called Why Not? published by Brucedale Press and most recently a much more challenging project.

She always wanted to regain that connection with Newfoundland, and it was a sudden idea one evening watching a setting sun that became a mission. She imagined that if she wrote a historical novel about Newfoundlanders, she would feel closer to the place of her birth. Would it work?

“My characters were always standing at my shoulder nudging me along as I typed,” she tells the curious who wondered at her determination to finish her manuscript while others prefer to enjoy their senior years in more relaxing ways. “I worked on the manuscript for eight years to bring this saga of two founding families over three generations to an emotional conclusion. But now I feel satisfied, I know I am a Newfoundlander, the book did it!”

Rock Solid is filled with fact and fiction: passionate love, an unforgiving ocean, a city burning to the ground in 1846, and a delightful old man whose suggestion to the four young Newfoundland friends in the story, changes their lives forever. And with Rock Solid of course, Newfoundland humour abounds.

Helfenstein has painted a sweeping landscape of the life and times of those early settlers who never gave in to the struggles. They faced life on the rock and took great joy in identifying themselves as true Newfoundlanders. And still do.

She believes Newfoundlanders who still live on the island as well as those living across Canada and in USA will find some of their own life story in this novel that moves from Bell Island to Cape Spear to Brigus South and beyond. Her characters and their stories are rock solid.

Rock Solid can be ordered through local book stores and through Amazon.ca, amazon.com, and in USA through Barnes and Noble, Friesen Book Store.

What friends have to say about 'ROCK SOLID'

I was charmed. Rock Solid was difficult to put down as was necessary during this busy summer and a joy to pick up again. One understands the caring strength of the people of Newfoundland that has been passed down over the generations.

Struggles with that rocky and challenging landscape built independence on one another, love for the land, family and friends.

Thank you for sharing this tale. It touched my heart knowing you and Harry were Rock Solid in your commitments to this book and to one another.
Each character was strongly realized and difficult for me to choose one over the other as you had asked. Marian and Ted seemed to possess the enduring central strength.

Jane Hunter in Sarnia, ON

I did remember my first letter to you. I recall noting the marvelous amount of research you had done and were able to get all in order. It was truly a pleasant book to read, in spite of the hardships the people (of Newfoundland) endured.
I may be prejudiced but I think the women in Rock Solid had to adjust to more than the men – keeping the families fed, safe and together. I don’t think I could have done it. Anyway, what I wrote weeks go, has long fled my mind. I love the book!

I just finished reading Rock Solid, Carol, and thoroughly enjoyed it. Your descriptive settings brought your characters to life in my mind. I have even more of a desire to go visit Newfoundland now!

We had a family friend, when I was growing up, who had come from Newfoundland as a bride. I could see the characteristics of Ruby in some of your characters.

Thanks for the memories.

I loved your book! Thank you for an engaging story. I love Canadian history and it was wonderful the way you wove your story and the history of Newfoundland. Please keep writing!

Why Not? - A Review by Ronald Mackay

In a modest, but by no means, insignificant way, this book contributes to Canadian history. In particular – to local history – it vividly and affectionately reminds us of the many and important ways that a local newspaper sustains and supports our rural communities.

In the 30 evocatively titled chapters of “Why Not? A Memoir in Black and White”, Carolyn Muir Helfenstein invites us to take a front-seat onto all that is involved in running the community newspaper she and her husband Harry, took over and ran for 12 years beginning in 1986. Then she leads us backstage so that we can appreciate the inner workings, joys, challenges, negotiations, and politics – everything that such a daunting undertaking entails.

Carolyn and Harry transitioned into publishers and editors from dairy farming! More than any other book I have read, “Why Not” is a touching testimony to the fearlessness, the initiative, the persistence and the joy and commitment that rural Canadians – and that includes those Canada has attracted to its shores and its farms – brings to whatever challenge they encounter. Convinced that a rural newspaper should be created within the community it purports to represent, and upon which it relies for its devoted readers, Carolyn, Harry and their team lock into a steep learning curve with the aging technology that they inherited and proceed slowly but surely to modernise the infrastructure as well as ensure the news is pertinent and meaningful. After all, this is how communities served by newspapers like the Teeswater News recognise themselves, reproduce themselves, and are kept alive.

Carolyn’s exuberance is infectious; Harry’s utter reliability permeates every line. Together they possess not only the spirit but also the competence, innovation, and people skills to turn everything – even mistakes — into assets, such as a headline a “Lovely June Weeding” for a bride.

The story-line is simple – how the couple took over and made a success of a community newspaper – is simple but Carolyn’s writing makes it deeply engaging. She is a master at building tension and then leaving you breathless with anticipation – a skill that distinguished that master-writer for newspapers, Charles Dickens. Carol has a nose for news and in this book she covers everything: the key role played by women on the farm, the importance of keeping a critical eye on local municipal government, and, sadly, the murder of a child to this day unsolved. Anybody who has ever experienced the temptation to write, will thoroughly enjoy Why Not?

More reviews of Why Not?

Who knew running a small town newspaper could be such an interesting read, Carolyn has nailed it! I couldn’t put it down!

Harry and Carol Helfenstein’s leap of faith into the challenging world of community newspapers is a
reader’s delight!