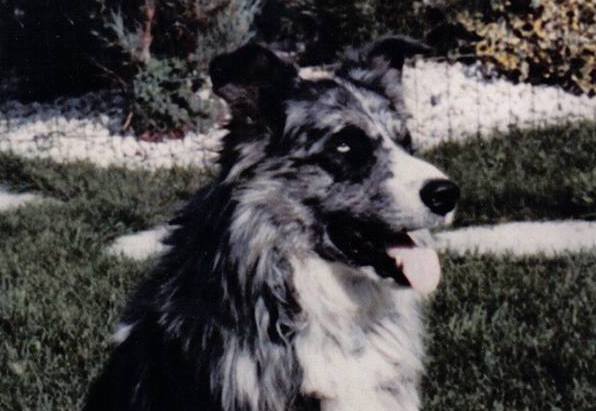 This is not an ordinary obituary.

Farm dogs guard the farmer’s home, their loud dependable bark announces incoming cars and trucks. They make doorbells unnecessary. And within a five second sniff of a truck wheel an average farm dog can determine where a truck has been that day and being social creatures, they leave a polite hello on the wheel to great the next farm dog. Farm dogs take farm families for walks. They picnic with the boss when he stops momentarily to grab a sandwich on a hot summer’s day. Their job description is endless.

Getting back to a dog named Kelpie, he was a farm dog for sure, but . . . he was just a little bit different. One never forgot him. Picture getting out of your car to be greeted by Kelpie, a rainbow of doggie colours from blue to grey to copper. Picture two blue eyes dancing with enthusiasm for what, you can’t sure, at first. Then, picture this shepherd breed from the grasslands of Australia (for that was his ancestry) presenting you with a huge stick and with all his doggie language, telling you to throw that stick. Over the past five years I have thrown Kelpie sticks as far as I could, as high as I could, even up a tree, and on a roof.

He never once was unable to retrieve a single stick. If you dared to go into that farmhouse, he would just sit and wait — with his stick. And then he would begin again. He had a job to do.

Had the herding instinct of long ago been transposed onto a stick? I’m not sure. But I do know he demanded my attention. From Kelpie, I learned that a person has a job to do too and if circumstances allow, like Kelpie, the job will be done.

Farmers are perfect examples of “the Kelpie spirit.” For example, they ask only for agreeable weather and they will work from dawn to dusk to get the job done. They ask for neither dental plan nor sick leave, overtime nor early retirement benefits. They just do their job and start again. That has always been farming, a way of life so intrinsically rewarding that very few farmers could be pried away from it.

Kelpie, your family will always remember you. Your enthusiasm will be recalled for years to come. Grandchildren will have a lifelong love of canines because of you. As I see it, the drive to chase that stick exists for no reason other than it is there to be chased. It’s a drive that’s been beaten out of most of us by an economy that does not allow for the Kelpie spirit nor the family farm.

Will that enthusiasm for the job be alive in the generations to come?

← Previous: The Seven Rs of Pandemic Writing Next: : Survival Art →