Alone: A Winter in the Woods is now an e-book

Felicity is excited to announce that almost five years after the publication of Alone: A Winter in the Woods as a print edition(Hidden Brook Press 2015), the book is now released as an e-book. 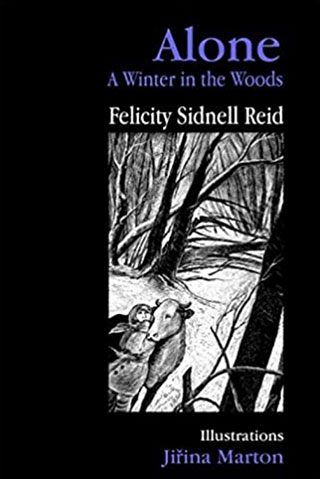 Alone: A Winter in the Woods is a story for all ages. It quickly engages the reader in thirteen year-old John Turner’s adventures. Forced to grow up quickly, while left alone on the family’s land grant in a virtually unsettled township, on the shore of Lake Ontario, in the winter of 1797, John has to overcome devastating isolation and loneliness. With only a pair of oxen, a pregnant cow, a handful of chickens and his dog to keep him company, everyday tasks become ten times more difficult than they were while Pa was still with him, building their tiny cabin. Meanwhile John’s mother has adopted the orphaned Joséphine, who keeps a journal recording the life of the Turners and her own experiences, while the family waits for Pa to return to Adolphustown to escort his wife and young children up the lake to the new settlement once spring allows water traffic to resume. This tale explores the differences and similarities between family life and expectations in the eighteenth century and the present, as John and Joséphine reflect on what home, family, and friendship mean to them and struggle to find the courage, determination and faith needed to face the future.

Excerpts from some of the reviews of Alone: A Winter in the Woods:

Felicity Sidnell Reid delivers a compelling, at times harrowing, adventure story that will be enjoyed by readers of any age…The book is filled with such vivid descriptions of the forest of Upper Canada, the rivers and marshes, the glimpses of Lake Ontario in the distance, and the changing seasons that the reader easily imagines sharing these surroundings.

Erika Rummel, author of many prize winning novels, the most recent being. The Road to Gesualdo and Three Women and Alfred Nobel says:

Alone introduces us to a panoply of characters–homesteaders, loyalist refugees, a young woman from Quebec, a family of Ojibwas, and a Methodist circuit rider. They made up the cultural patchwork of Canada then and foreshadow the multiculturalism of today. Alone is a coming of age story crowded with life and youthful derring-do.

The novel, Alone, skilfully combines historical fact with the writer’s imagination. Felicity Sidnell Reid’s writing brings us into the heart of a boy’s thoughts, and his courage, calm in the face of fear. She weaves history into the story much as an artist underlays a painting so that when one is finished, one has been on a journey back to 1797 with a young teen.

Ronald Mackay author of The Fortunate Isle: A Memoir of Tenerife and many short stories and travel articles.

Felicity Sidnell Reid’s skill as a historian, observer of humanity and wordsmith allows her to add depth and nuance to this story in the detail with which she presents the routines of everyday life, the human themes she addresses, and the incisiveness of the language she employs. Both principal characters are captivating. For the greater part of the story, John is physically isolated from his family and lives entirely without neighbors save for the occasional passing trader, Ojibway band or circuit rider. Perforce he must learn how to best cope. Josephine, though living with the rest of Turner family in Adolphustown, is within an alien culture and not yet quite adapted to her new environment. John’s perspective allows us to see what is going on at the ‘sharp’ end of settlement where no roads or villages yet exist; Josephine’s graphically illustrates what a small colonial settlement was like in those days and the pressures that bore down on a lone and vulnerable young woman.

The e-book can be found on the following sites:

← Previous: Releasing a Book During a Pandemic Next: : Wind Sniffing →