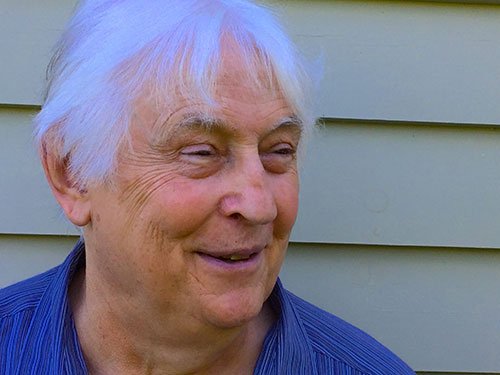 Michael Topa was born in Ann Arbor, Michigan and grew up there and in Texas and Afghanistan. His mother was hospitalized for severe depression when he was 8 years old, and the state of Michigan would not give sole custody to his father. The state wanted him instead to grow up in a foster home near the mental hospital where his mother lived. This plan was unacceptable to his father. Luckily, Michael’s father and his uncle, Dr. Robert Shaw, a thoracic surgeon, worked out a legal arrangement for him to live with his uncle’s family in Dallas, Texas. His poem The Trip is a look back at his abrupt trip to Dallas.

In 1962-63 Michael spent his grade 10 year in high school living with his uncle’s family in Kabul, Afghanistan where Dr. Shaw was teaching Afghan and Indian doctors techniques in thoracic surgery. He traveled in Afghanistan, Pakistan, India and Nepal during that time.

Michael spent 4 years in the United States Air Force as a Weather Observer during the Vietnam War (1966-1969). He immigrated to Canada in 1969 when his tour of duty in the USAF ended. Michael was educated at the Universities of Michigan, Guam, York and Toronto. He is married and has 3 adult children.

In his professional life, Michael has worked as a Psychoeducational Consultant in the field of school psychology, and is the co-founder and current Director of Greenoaks Educational Services. He has written poetry for more than 50 years.

In the last few years, Michael’s poems have won several awards in a variety of competitions. Most recently, his poem Jerusalem Slim was a runner up winner in the 2017 Foley Poetry Prize Contest and was published in the June 26, 2017 issue of America: The Jesuit Review of Faith and Culture. America has been published continuously since 1909, making it of the oldest periodicals in the United States today.

If you are interested in purchasing a copy of Unfinished Business, please email Michael at greenoaks2@yahoo.com. It is available for $23.00. This price includes tax, packaging and postage costs.

A Few of My Poems

Fragments of that journey remain
An American Airlines stewardess
Calmed his childhood fears with a
Soft drink and 2 fluffy pillows that
He clutched for safety as the DC-3
Made its scheduled stopovers in
Chicago and St. Louis that night

*This is what my father called Christ, alone
and muttering to himself, while nursing his
Four Roses whiskey at the kitchen table.

The Scent of the World